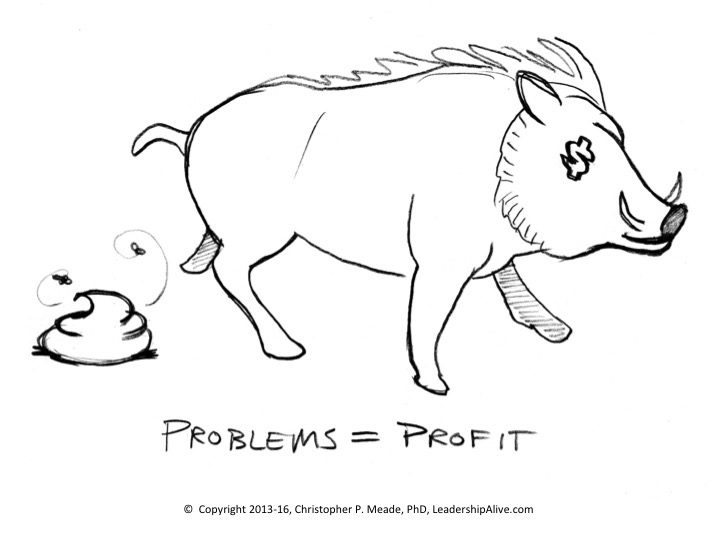 Increase From The Ox

One of my favorite metaphors from the ancient agrarian world is encapsulated in the saying, “Without oxen a stall is clean, but great is the increase by the power of the ox.” The sage explains a choice every farmer had to make (and we do too). If they wanted a full harvest, abundant fruitfulness, large profit, and a steady increase from the efforts of their hard-working ox, then they had to feed the ox and keep its stall clean. Those were the pros. The cons? Lots of poop had to be cleaned up each day out of the stall. The other option was to have a clean stall, with no poop to clean up, and no ox to worry about. This, of course, equates to little or no harvest (profit).

Fast forward to the 21st century and this principle is still relevant. We each have to make this same choice in our lives as business leaders. If we steward and solve problems well, we’ll receive its reward––increase. Or we can sign up for a life and a job with no problems and a clean stall, and we’ll receive the result of that option as well––little or no increase. It’s either door number one (ox, poop, and great increase) or door number two (no ox, no poop, no problems, and no increase). Becoming an effective creative problem-solver brings increase into our lives financially, personally, professionally, and relationally.

The funny thing is that most people today don’t want any more problems on their plate. In fact, we often define our happiness factor based on how many problems we have or don’t have. The restaurant TGI Fridays’ slogan is “In Here, It’s Always Friday!” This international restaurant chain took its name from the expression TGIF (Thank God It’s Friday). TGI Fridays’ clever mantra has actually become part of popular culture, and it’s the goal for many Americans––living for the weekend to forget about their problems. Research has shown that people are happier on Friday than on any other day. More people suffer heart attacks on Monday than on any other day. Surveys indicate it’s because people are back at work and stressed out over their problems on Monday, and on Friday it’s all over for a few days.

Part of the secret to creative problem solving begins first in how we view problems from the get go. If we want to be good at solving problems, and receiving the reward (increase from the ox), then we must view problems differently. Creative problem-solving first begins as an attitude. We must see problems as the precursor to opportunity.

Years ago, I started a service/sales business. The company also specialized in emergency fire and water damage restoration. Our normal day-to-day work brought in normal revenue. Good service, a talented sales force, efficient systems, hard work, and being really frugal were the bread-and-butter building blocks needed to turn a profit. But every now and then, insurance companies would call on us to help in an emergency disaster of some sort that involved fire or water damage. These jobs were incredible headaches. They added lots of complexity as well as many long hours to our daily work routines. But, it always paid very well. We could make a large profit in a relatively short amount of time. These large-scale jobs were a kind of love-hate opportunity for us.

Lesson From a Javelina

One time the phone rang in the middle of the night and we were called out to a school in the foothills. It was a beautiful new school with top-of-the-line furnishings, equipment, and décor. I drove to the school and met the principal out front. He told me a wild javelina had broken into the school in the middle of the night, and was trapped in his office. (A javelina is a large, wild boar-like animal with sharp tusks and teeth that is native to southern Arizona). The principal then dropped the bomb on me. “He pooped all throughout our offices and all over our furniture.” I went into the office with the principal after Animal Control removed the javelina. I was about knocked over from the most sickening smell you can imagine. Long story short, the principal wanted our company to thoroughly clean every piece of furniture, as well as conduct other restoration and decontamination processes in the their facility.

“We focus on fire and water cleanup. We normally don’t do this kind of stuff. You should probably call someone else,” I told him. I thanked him and left. Later, he called back and said he couldn’t find anyone who was willing to do the job. He begged us and said he would pay whatever we wanted if we would just take on the job. We ended up saying yes. We bid the job high because of all the unknowns. We ended up making a very large profit from that one job. I learned that day that the bigger the problem, the bigger the potential profit. Javelina poop never smelled so good from that day on! Amazing what several thousand dollars can do to a person’s nose! If you want the increase from the ox (or the javelina in this case) you have to be willing to clean up the poop in the stall!

Reframing Problems as Opportunities In The Making

To be successful in life we must reframe our “TGIF worldview” to a lens that views problems as the precursor to opportunity, increase, fruitfulness, profit and mission fulfillment.  Forward-thinking leaders have trained their eyes to see the harvest and not just the poop in the stall! Having the right perspective is always a competitive advantage. Seeing problems as opportunities in the making is a timeless truth. The Chinese character for “crisis” is actually two words: danger plus opportunity. As leaders, managers and business professionals who live in a changing and competitive global economy, those two words describe our world pretty accurately. The right perspective is everything. Problems are connected to increase. The bigger the problem, the bigger the potential reward for solving it.

Let me ask you, are you facing some problems and disruption at work and in life that you have labeled as “poop in your stall” rather than a necessary precursor to future possibility? If so, let me encourage you: Don’t be afraid of the poop! It’s very possible that some of the problems and frustrations you are facing right now, if reframed as opportunities in the making, might very well be the first of a series of actions that will eventually bring about increase, breakthrough, innovation and mission fulfillment for you and your team in the near future. Remember: Most every realized opportunity first manifested itself in the form of a crisis, problem or challenge of some sort.